Sylvester was the fifth of thirteen children in his family. He was born in 1829, and his family moved to Erie County in 1833 from the eastern part of NY State. Rhoda was born in 1827 in the nearby town of Java, where her father (Elijah Smith) was one of the first settlers in that area. Sylvester and Rhoda were married in 1854. He was a store keeper, farmer and miller in Java Village, before moving the short distance to East Aurora in 1873.

They purchased and operated a 280 acre dairy farm on Big Tree Road just east of The Lilacs, and subsequently purchased The Lilacs in 1878. The 280 acre dairy farm was then advertised for sale in the East Aurora Advertiser for $50 per acre. However, Sylvester and Rhoda continued to raise prize cattle and sheep at The Lilacs. Sylvester may also have owned several other properties in the area, as records show a number of land deals in his name in the surrounding area from the 1850s onward.

Sylvester and Rhoda had three children, a son and two daughters. The 1880 census shows Sylvester and Rhoda living at The Lilacs with two of their three children - Abbott (son, age 19) and Bertha (daughter, age 10) - along with a teenage boarder (farm worker) from England. Mabel (also known as Bell) was their other daughter - she married into the Henshaw family and moved to Des Moines, IA. In 1893, Bertha married Fay Ball. Rev. Richard M. Sanford’s Journal of Marriages records that they were married on May 3, 1893 at the bride’s home, at which time Bertha was 24 and Fay was 26. Fay came from a farming family in nearby Marilla, NY.

Sylvester and his son, Abbott, started a business, S. Griggs & Son, which handled flour, feed, coal and lumber. In 1878, they built a fairly substantial flour and feed mill (64x34, 3 stories high) with a saw and lath mill attached. This mill burned down in 1888, and was rebuilt. At about this time, Sylvester retired and Abbott assumed full control of the business, changing the name to A.S. Griggs Company. It later became known as Griggs & Ball when Fay Ball, upon marrying Bertha, joined the business in 1893. Abbott went on to become very prominent in East Aurora business circles, serving as president of both the First National Bank of East Aurora and the Erie County Trust Company. Abbott subsequently built the grand house at 871 Main St. in East Aurora in the early 1890s, which house still stands. 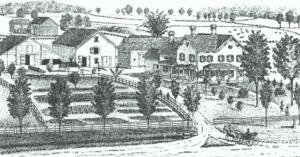 Sylvester and Rhoda were obviously very proud of their new home at The Lilacs, and they had an artist’s sketch of the property (house and barns) included in the 1880 Atlas of Erie County. They made some improvements to the property, including Rhoda adding a new veranda to the house shortly after Sylvester’s death.

During the autumn of 1881, they built a new dwelling (cottage) near the road, which served as a tenant house. The 1880 census shows a young man (18 years old – could not read or write) from England, as a boarder and farm worker living with the Griggs – he may have subsequently become the first tenant for the new cottage. The East Aurora Advertiser reported in August 1881 that Sylvester was “getting lumber on the ground for building a new residence on his farm”. The Advertiser subsequently reported on Sept 9, 1881 that “Griggs new dwelling is up and under rapid progress toward completion.”
Rhoda subsequently moved into this cottage when she sold The Lilacs in 1891. Incidentally, shortly after Anthony Schreiber purchased The Lilacs in 1917, this cottage was relocated next to the barns to serve as his chauffeur’s dwelling (the barn was used as a garage). This unique and charming cottage remains in use today as a guest cottage at The Lilacs.

Although very busy with farming and the milling business, Sylvester was also very involved in community affairs in both Java and East Aurora. He was listed as the Town of Aurora Assessor in 1883. He was also a strong supporter of the Presbyterian Church.

Sylvester was in ill health in the autumn of 1889. He and Rhoda decided to spend that winter in Southern California, hoping it would improve his health. However, the remedy was short-lived, and he passed away in San Francisco in January 1890 at 61 years of age. His body was subsequently returned to East Aurora for internment. The East Aurora Advertiser opined that the area “lost one of its most prominent and respected citizens”.

Rhoda was a long-time and earnest temperance advocate during her lifetime, and became an active member of the W.C.T.U. (Women’s Christian Temperance Union) upon its founding in 1874. Prohibition laws were first enacted in NY in the 1850s, and the temperance movement was very strong in Upstate New York. The cause became a dominant theme of national political discourse during the latter part of the 19th century, finally resulting in the imposition of Prohibition in 1919.

When Rhoda sold The Lilacs to David Page in 1891, she kept a half-acre lot in the southwest corner of the property (on Big Tree Road near Tannery Brook) upon which the tenant house stood. She spent her remaining years splitting her time between living in the cottage and staying with either Abbott or Bertha, both of whom lived within a half mile. She passed away in June 1899 at 72 years of age. Incidentally, her half-acre lot went through 3 more ownership changes before it was purchased by Anthony Schreiber in 1918, becoming once again part of The Lilacs property.