Richard Odiorne and Dorothy Bottoms were both from suburban Philadelphia, born in 1904 and 1905 respectively. Both were graduates of the University of Pennsylvania. They married and had two daughters – Barbara and Susan.

Richard had a long and successful career of 27 years with the Connecticut General Life Insurance Company. They moved to Buffalo when he became the Buffalo Office Manager for Connecticut General. They lived in Buffalo for a number of years before moving to East Aurora, and lived in the village prior to purchasing The Lilacs in 1943. Richard was involved with various Buffalo life insurance associations, as well as the University of Pennsylvania Alumni Association. Both he and Dorothy were active members of the East Aurora Country Club, with Richard serving a term as president. 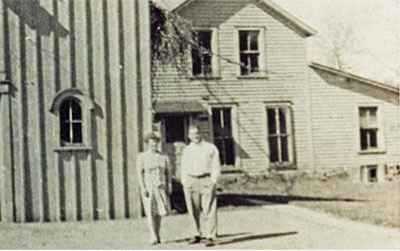 As The Lilacs had been vacant for some 4 years prior to the Odiorne’s residency, the grounds and gardens that Anthony Schreiber had spent so much time and treasure on had already started to deteriorate and become over-grown. In fact, many people in East Aurora (especially children) referred to the house as being haunted. Richard and Dorothy spent the rest of their life at The Lilacs, although they didn’t always live in the main house. They moved into the cottage and the house became a multi-family facility.

Significant changes occurred to the property during the 1960s and 1970s. One such change was when New York State constructed Route 400 (4 lane divided highway) on the eastern border of The Lilacs. In doing so, the State indiscrimately cut though some of The Lilacs’s prime garden areas – despite the protestations of the Odiornes. Another major change occurred in the autumn of 1977 when approximately two-thirds of the property (north end) was sold to a developer and became a housing development.